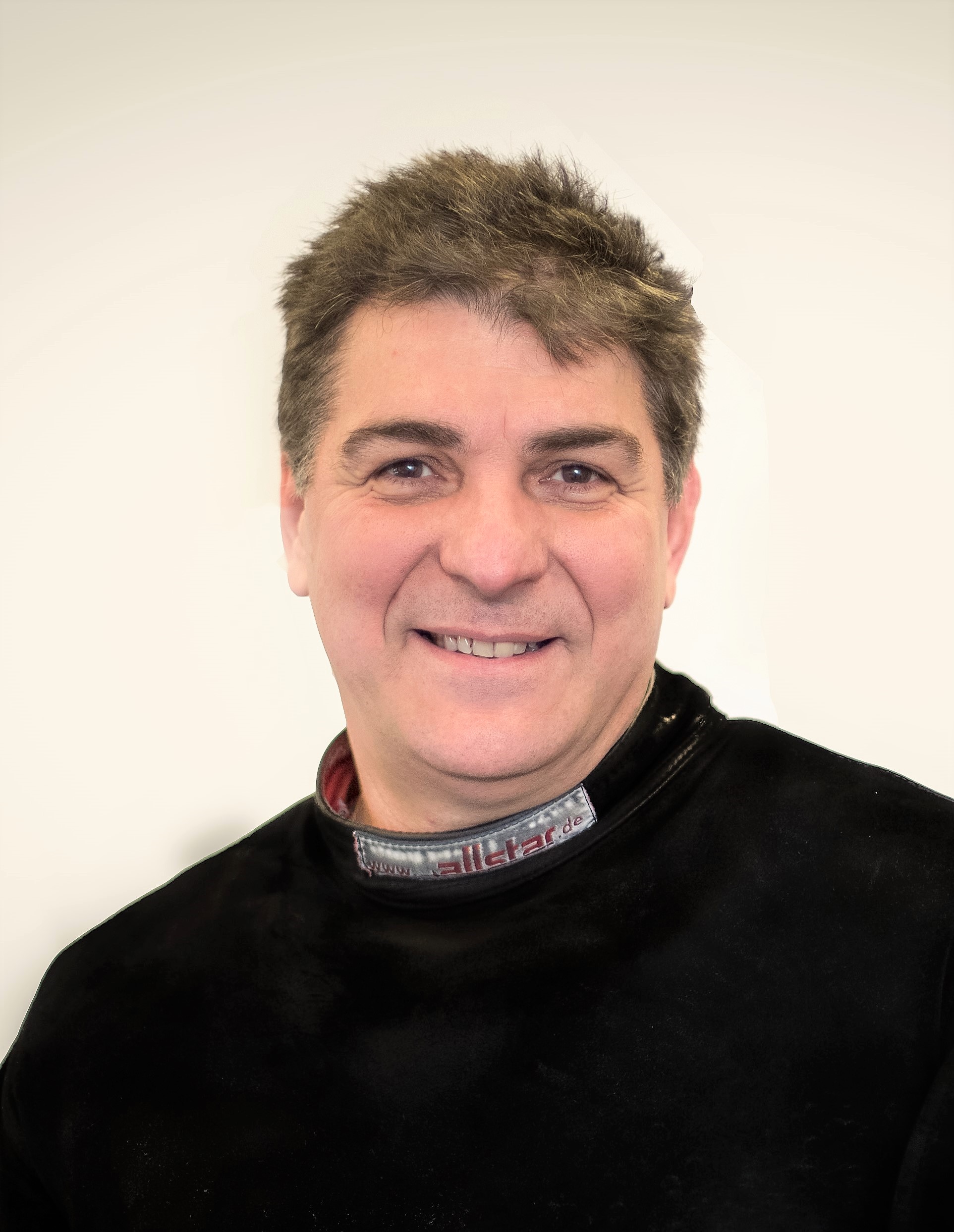 Daniel started his swordplay career with dreams of earning a spot among the Three Musketeers.
Enthralled by the adventures of the trio, 7-year-old Daniel picked up his first rapier, beginning a lifelong journey which continues today.

Member of the Romanian National Épée Team, 12 times in a row  National Champion, multiple times winner of Balkanic Games (a fencing championship very popular in Europe) and finalist in World Cup Competitions during the 80’s, Daniel basically grew up with the épée in his hand.

Receiver of a Bachelor’s degree in Physical Education from the National Academy of Physical Education and Sport in Bucharest, Romania, he has laid down the sword and took up the mantle of coach, teaching the Romanian Junior Team techniques he’d learned throughout his career.

The 1996 Atlanta Olympics Games brought him to America, where he continues to share the art of fencing with students of all ages and experience levels. 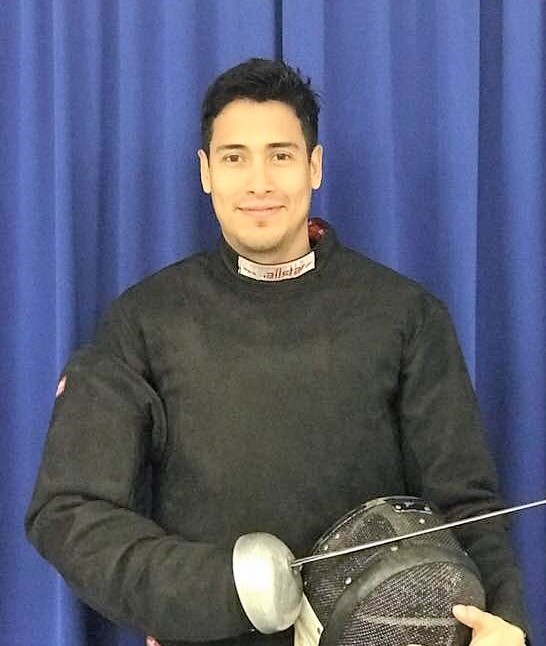 Mr. Julian Rueda Espinosa has come highly recommended by influential people in the world of fencing, such as Mr. Angel Fernandez, the Epee Head Coach of the National Spanish Team and Mr. Juan Miguel Paz, the Director of Technical Commission of the Colombian Fencing Federation, among others, with a great resume that shows extraordinary skill and knowledge.

During his career as an epee fencer, he had won several Colombian National titles and shows a successful career as a participant in the South and Central American Games.
Julian has completed several fencing studies over a period of three years, between 2012 and 2015, including the Institut Nacional d’Educacio Fisica de Catalunya, a very prestigious school in Barcelona, Spain, where he gets his General Course of Sciences degree among other coaching credits and diplomas, who prove his knowledge in the field.

During and after his studies, he has continued to teach epee fencing in the Colombian cities of Bogota and Cali, culminating with his position as the Secretary of Sport and Head Coach of the Colombian Cadet and Junior Team.

Julian is available for private lessons (exclusively to our club members): julian@olympiafencingcenter.com 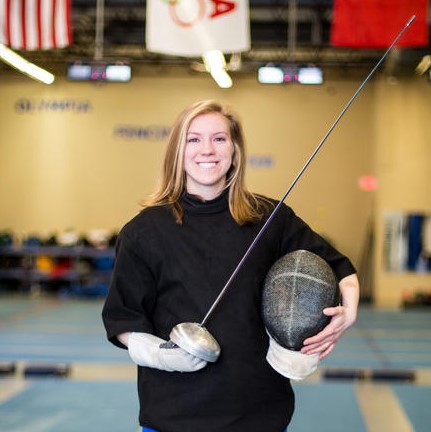 Lori began fencing in college and was a member of the Boston University Fencing Club. She graduated with a bachelor’s degree in psychology in 2010.
Prior to college, Lori had been playing tennis competitively for many years and has gained experience in training children and people with disability.

Ms. Schmidt has been with our club since 2013 and, as of March 2018, she raised three generations of Youth Competitive fencers, as a class teacher and private coach.

Lori still competes at the national level and aspires to compete internationally.
Email Lori at: lori@olympiafencingcenter.com

Katherine holds a Bachelor Degree in Sports and Physical Education from the National Institute of Sport, a prestigious university in Cali, Valle del Cauca, Colombia.
After completing her studies in fencing, she became a certified coach by the International Olympic Committee in 2014. During and after her studies, Katherine has continued to teach the sport of fencing, culminating with her position as the Youth Coach of the Colombian National team.
Both Ms. Roa Rodriguez and Mr. Rueda Espinoza are receivers of the O1 visa, for  people who demonstrate extraordinary ability in their field.
We’re very pleased to welcome Katherine to our professional coaches team, starting in August 2019. 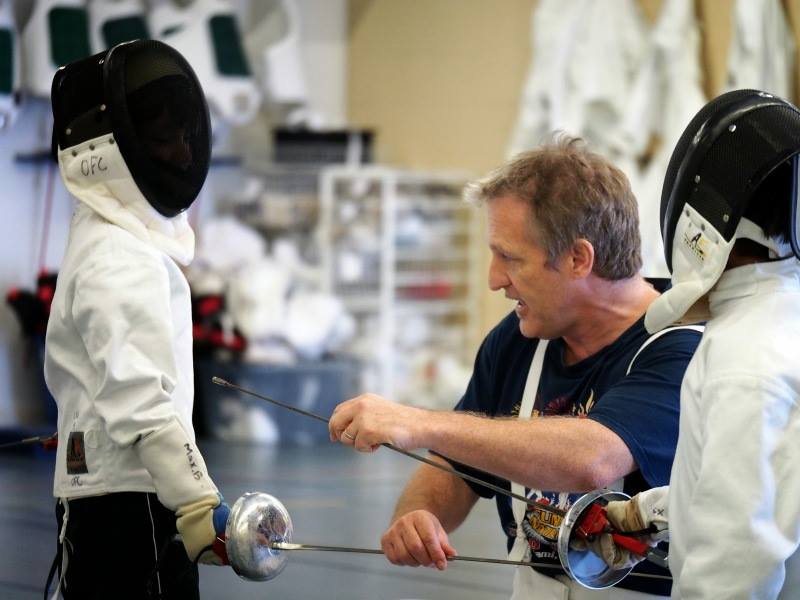 Scott Foster is a mathematics teacher with the Boston Public Schools and holds a Master’s Degree from the Harvard Graduate School of Education. Scott learned to fence at his local Y and as a youth fencer reached the semi-finals at the National Junior Olympics solely on the basis of group lessons. Scott continues to train and compete, as well as coach the Musketeer classes.

Scott can be reached at: scott@olympiafencingcenter.com

Many of us know Angélica as the mom of Alejandra and Isabela Trumble, Olympia’s former students but very few know that Angelica is a Media Arts Studio teacher at the Cambridge Rindge and Latin High School fencing team, more than that, she is running the CRLS Falcons Fencing team!

Recipient of the Intellectual Contribution/Faculty Tribute Award Recipient, 2009 Harvard Graduate School of Education, Angélica’s career has revolved around her love for teaching, arts and… fencing.

We’re very happy to welcome Angélica to our coaches team! 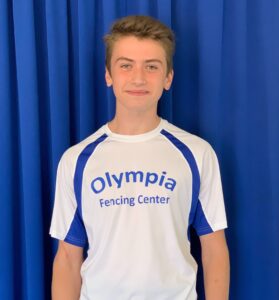 Tony is a Junior at Cambridge Rindge & Latin School in Cambridge, where he lives with his parents, his 12-year-old brother, a foil fencer, and his two years old baby sister.

Tony has started fencing by attending a trial class when he was 10 years old, and he fell in love with it!
He has been fencing at Olympia ever since and plans to continue in college, and even having his own fencing club.
Tony is competing at the National and international levels, currently holding an A19 rating after winning back to back events (Cadet and Junior) at RJCC.
His favorite result is gold at the 2019 Capitol Clash Y14 event, where he made a comeback from a 4-13 deficit — reinforcing the fencing truism to take things one touch at a time. Tony is traveling to Bratislava, Slovakia in 2020 to fence in a European Cadet Circuit event.
He earned First-Team and Second-Team Academic All American distinctions from USA Fencing, demonstrating once again that fencing and good education go hand in hand.