You were watching a fencing match and your jaw fell on the floor, because you can’t “see” what’s happening….

The sport of fencing is fast and athletic. We’ll help you understand.
Also, at the very end of this page, we’ll give you tips on how to follow a fencing bout. 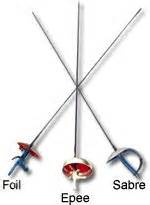 Three weapons — the foil, the sabre, and the épée — are used in fencing, and there are individual and team competitions for each.

Foil and épée are “point thrusting” weapons, while the sabre can both thrust and slash with its blade edge.
While some fencers compete in all three events, the elite generally choose to focus their energies on mastering one weapon.

Since the art of fencing evolved as a sport, the action is so fast, all three weapons have been modified to allow for electronic scoring.

Fast Fact: The tip of the fencing weapon is the second fastest moving object in sport; the first is the marksman’s bullet!

The foil is a descendant of the light court sword formerly used by nobility to train for duels.
It has a flexible, rectangular blade, approximately 35 inches in length and weighing less than one pound.

Points are scored with the tip of the blade and must land on valid targets: torso from shoulders to groin in the front and to the waist in the back. The arms, neck, head and legs are considered off-target. Hits to this non-valid target temporarily halts the fencing action, but does not result any points being awarded.

Fast fact: Fencers wear white uniforms because, before the advent of electronic scoring, touches were recorded on the usually white surface with a wad of ink-soaked cotton on the tips of the weapons.  But since our first Nationals in 1888 rules on the colors required of uniforms (then called “suits” or “costumes”) varied, from “dark colors” to “white with black stitching” to “any color”, from 1897 to the early 1900′s. Our rules even required foil fencers to have buckskin or chamois covering the front of the jacket (1900).

The foil fencer’s uniform includes a metallic vest, called a lamé, which covers the valid target area, so that a valid touch will register as a colored light. A tip is attached to the point of the foil and is connected to a wire inside the blade.

The fencer wears a cord inside his uniform which connects the foil to a wire, connected to the scoring machine.

Fast fact: The first electronic scoring machine for fencing that was approved for the Olympic Games was invented in 1936 by Hugh Alessandroni, Alfred Skrobisch and George Baker (Columbia University).  Its earlier version was developed by  named after Monsieur Laurent, a French engineer, who developed the device in the 1920’s and Monsieur Pagan of the Société d’Escrime de Genève who improved it.
It was called the “Laurent-Pagan electric scoring apparatus”.
Épée became electrified first, the foil, and finally sabre , which didn’t fully happen until the 1990’s.

There are 3 lights on the fencing machine: red, green and yellow (white). That last light is usually yellow, but on some types of machines it looks white instead.
Color (red or green) means a touch by a fencer in a valid target area.

Side matters!
In épée, that means any touch anywhere. When both lights go off in épée, the both get the point!
In foil and sabre, it’s only on a touch made on a lame (foil/sabre), or mask (sabre only). Yellow (white) indicates an off-target touch in foil or a fault in both foil and sabre.
These “off target” hits do not count as a point, but they do stop the fencing action.

On the machine itself, the lights are always on the same side. The red is going to be on the left and the green is going to be on the right.
Next time you’re watching a fencing bout, take a look at the position of the referee. Then you’ll know this – the fencer on the referee’s right will score with the green light and the fencer on the referee’s left will score with the red light.

One of the most difficult things to understand in foil is the rule of right-of-way. This rule was established to teach swordsmen how to stay alive in a duel.  “Right-of-way” is the differentiation of offense and defense, made by the referee.

The difference is important only when two lights go on at the same time in foil. When this happens, the winner of the point is the one who the referee determined had the right to the attack at the time the lights lit. This is determined in two ways either the first two attack or the last to fail. If one person fails the other takes over as the attacker.

Fast fact: In a fencing bout, it’s the referee that awards the point, not the machine.
Funny coincidence?
The placement of the lights on the fencing scoring machine are EXACTLY like the placement of lights on ships at sea!! At night you’ll notice that right side of a yacht has green lights and the left side has red lights. Every sailor and yacht owner knows this rule, and based on the direction of the lights they know which side of the ship they are looking at.

The épée (literally meaning “sword” in French and pronounced “EPP-pay”), is the descendant of the dueling sword.
The épée is similar in length to the foil, but is heavier, weighing approximately 27 ounces, with a larger guard (to protect the hand from a valid hit) and a much stiffer blade.
Touches are scored only with the point of the blade and the entire body is the valid target area.

Épée does not use the right-of-way instead, it is the weapon of timing control, the first person to get the touch earns the point. If both fencers hit within 1/25th of a second of each other, both earn a point.

The blade of an épée is wired with a tip at the end, that completes an electrical circuit when it is depressed beyond a pressure of 750 grams. 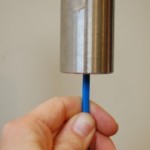 This causes the colored bulb on the scoring machine to light and the reason we see the referees often checking the weapons, during bouts, with a weight.

Fast fact: The 750 gram weight test used to calibrate a touch, or is based on the amount of tension required to break the skin. In a duel, the victor’s honor was insured when blood was first drawn, even if from a minor wound such as a blister.

The sabre is the modern version of the slashing cavalry sword, and is similar in length and weight to the foil. The major difference is that the sabre is a thrusting weapon as well as a cutting weapon (use of the blade).
The target area is from the bend of the hips (both front and back), to the top of the head, simulating the cavalry rider on a horse.

The sabre fencer’s uniform includes a metallic mask, metallic jacket (lamé) and lame glove, which covers the target area, to register a valid touch on the scoring machine.

Just as in foil, there are two scoring lights on the machine. One shows a green light when a fencer is hit the other shows a red light, when their opponent is hit. There is no off target in saber.

As with the foil, in saber is used the rule of right-of-way, same as explained above.

Fast fact: it wasn’t until the 1992 Olympic Games in Barcelona that electric sabres were widely used—a year when the world’s first smartphone was introduced. Fencing technology, in other words, takes a little bit longer to evolve, even if the sport itself has been practiced since time immemorial.

And now, about the game.

In fencing, a match in between two fencers is called a bout.

Two fencers are moving back and forth, on 6 by 44-feet strip.

Fast fact: The end of the fencing strip represents the line drawn in the earth by duelists’ seconds: to retreat behind this line during the duel, indicated cowardice and loss of honor. 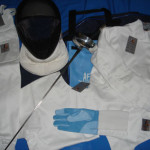 Fencing at the Olympic Games will feature a single-elimination table format, much like that used in Tennis. There will be no preliminary rounds, as the initial seeding into the table will be determined by World Rankings.

A fencing bout can reach an impressive speed, so, if you’re new to fencing, it is difficult to follow the fencers’ actions.

To become more comfortable in watching, focus on one fencer. The fencer being attacked, defends himself by use of a parry, a motion used to deflect the opponent’s blade, after which the defender can make a riposte, an answering attack. The two adversaries keep changing between offense and defense. Whenever a hit is made, the referee will stop the bout, describe the actions, and decide whether or not to award a touch.

Fencers seek to maintain a safe distance from each other, out of range of the other’s attack. Then, one will try to break this distance to gain the advantage for an attack.  Sometimes, a fencer will fake an attack, to estimate the types of reactions of the opponent which can be deceived in the real attack.

Once becoming used to the speed of the game, the tactics and strategies become more apparent, and you will gain a better understanding for the finesse and fascination of fencing.