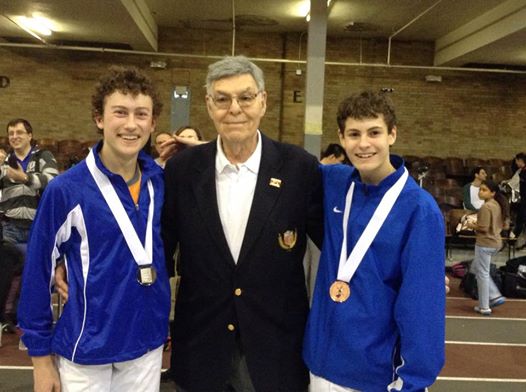 Silver and Bronze at the Steve Sobel, 2014

“Steve Sobel is a former President of the USFA (1972-1976 and 1992-1996), League Counsel, and past Vice President of the US 3 Committee. He began his fencing achievements as the 1954 NCAA Saber champion for Columbia University. He served as Chief of Mission for the US Pan American Game’s team and USOC Delegate to the Pan American Sports Organization. Steve continues to be an active member of numerous US Fencing committees.” (askfred.net)

Five medals in the first day of the competition and consistently called to the podium, Olympia Fencing Center’s students have placed themselves in the top 16, during the two days of this prestigious National event.

Josh Wolkoff (has done it again :)) – Silver in Cadet Men’s Épée.
Robert Hondor – 5th (losing for the semi-final 15-14), in the same event and 12th, Y14 Men’s epee.
Emily Vermeule – Bronze, Cadet Women’s Épée and 7th, Y14 Women’s Epee.
Spencer (the “epic bro”) Vermeule – Bronze, as well, in Y10, Men’s Épée.
Little Stella “Panda” Harris – has gone up a notch, to the Y12 Women’s and got herself a nice 8th place – well done Stella, Spence, Em, Rob and Joshie!!
This is one of those tournaments when our fencers go on their own, without coaching to make a statement on how to apply your knowledge and deliver – mission accomplished – they all did great!!

Warm congratulations to all!!

Olympia Fencing Center
4.0
Based on 9 reviews
See all reviewsWrite a review
Tonight was my second class here, and it was even better than the first one. This is a top notch club, and I could not recommend them enough. I had never...

Due to the snow, the classes will wrap up early to

Happy Lunar New Year from our Olympia family to yo

Congratulations to Nour Azmeh for her 7th place fi

Congratulations to Luka Loncar and USA Team 1 on w